The promise of multichannel retailing

In a year of doom and gloom for retailers, the continued emergence of online sales has been a bright spot. Why then do so few companies get true multichannel retailing right?

If one certainty about economic downturns is that they end,

another is that traditional retailers recover slowly. In the United States, for example, only 25 percent of drugstores, 40 percent of mass retailers, and 60 percent of specialty-apparel retailers returned to pre-recession growth rates within five years of the 2001 downturn.1 That’s time retailers can’t afford. The period when an economy emerges from a recession is pivotal to determining retail’s winners and losers, and our research suggests one of the keys to securing this success is to maintain investments throughout the business cycle. We believe that for companies coming out of the current recession, investing to build robust multichannel capabilities provides an attractive opportunity for retailers to set themselves apart from their peers.

For all the difficulty retailers have experienced in the past year, online sales have continued to be a bright spot: while overall sales have generally fallen in the United States, online sales have actually been increasing since the start of 2009.2 In fact, the percentage of total sales made online continues to increase, and our research also shows that more and more consumers are using the Internet to investigate products they later buy in stores. By 2011, we believe the Internet will play a role in more than 45 percent of US retail sales, as either a research t

Tool or a sales channel. What’s more, consumers who shop across a number of channels—physical stores, the Internet, and catalogs—spend about four times more annually than those who shop in just one (exhibit). Companies that get multichannel retailing right can enjoy larger profit margins and yearly revenue growth more than 100 basis points higher than companies that don’t. 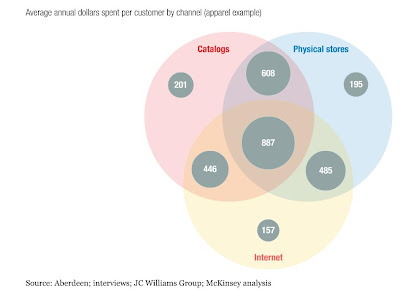 So, why do so few retailers actually get it right? The challenge is that while making sales through a number of independent (or, at best, loosely connected) channels is relatively easy, capturing the full benefits of multichannel retailing in its true form involves much more than simply publishing a catalog or replicating an in-store product assortment online and assuming that consumers will click and buy. The kind of multichannel retailing that fuels sustainable growth and margin expansion requires a tightly integrated strategy across all channels, including physical stores, catalogs, the Internet, and mobile—and even homes, in the case of certain service offerings. Each channel needs to play a clear (and often quite distinct) role in supporting and reinforcing a retailer’s overall brand equity.

To understand the different ways this approach works in practice, consider the multichannel strategies of the Swedish home products group IKEA and the US department store chain JCPenney. IKEA uses its Web channel primarily to support its stores—in fact, it does not offer online sales in many countries where it operates. Instead, ikea.com primarily provides information that reinforces the company’s reputation for innovative products and low prices, as well as real-time store inventories and shelf locations that help customers plan store visits. By contrast, JCPenney has leveraged its legacy as a successful catalog merchant into a tightly integrated cross-channel commerce offering. Stores are outfitted with Web kiosks, and all point-of-sale terminals have Web access so customers can easily purchase product categories, styles, and sizes not available in stores. JCPenney is even testing a system that allows customers to scan coupons in the store that have been sent directly to their mobile telephones. What’s important is that each of these channels builds upon JCPenney’s overall “fashion at a value” brand equity by highlighting exclusive brands and deep promotional pricing.

As illustrated by these two examples, there is no one-size-fits-all approach to developing a strong multichannel strategy, but in our experience successful efforts typically involve many of the following steps:

None of these methods is easy, and we’re working with companies to shape the focus and extent of their multichannel investments, understand and maximize financial impact on a category-by-category basis, and identify and overcome the hurdles that can prevent companies from unlocking multichannel’s full potential. We firmly believe that getting multichannel right is worth the effort: if correctly planned and executed, a truly integrated multichannel strategy will help a retailer not only maximize its share of a customer’s wallet over time but also emerge from the current recession stronger and more rapidly than its peers.

Steve Noble is a consultant in McKinsey’s Minneapolis office, Amy Guggenheim Shenkan a consultant in the San Francisco office, andChristiana Shi a director in the Orange County office.